The first European settlement was established in 1482 by the Portuguese, who declared the country a colony in 1850. Independence did not come until 1960 and Ghana became a republic, but the fundamental values ​​of civil liberties and the rule of constitutional law were far from being implemented. With the help of a military coup, 32-year-old J. Rawlings came to power in 1979. Democratic structures were introduced under pressure from world politics. However, the dictatorial traits of the past were preserved. Intellectuals were kidnapped or murdered.

From January 2001, John Agyekum Kufuor ruled the country. He studied abroad and came to power after his return through a democratic election. President Kufuor could not be re-elected after 8 years.

His successor, Prof. Dr. John Evans Atta Mills was elected in December 2008 and took office on January 7, 2009. Former ministers from the military coup government are now in prison for corporate crime. President John Atta Mills ruled from January 7, 2009 to July 24, 2012. It is alleged that he was assassinated.

The previous Vice President, John Dramani Mahama, took the oath of office on the same day. On December 7, 2012, he achieved an absolute majority in the first round of the national presidential election.

Nana Addo Dankwa Akufo-Addo (born March 29, 1944 in Swalaba, Accra) has been President of the Republic of Ghana since January 7, 2017. Until July 31, 2007 he was Foreign Minister, Minister for Regional Integration and Minister for The New Partnership for Africa’s Development (NEPAD).  Akufo-Addo was educated at Lancing College in Sussex, England, and later went to the University of Ghana at Legon, Accra, where he graduated with a bachelor’s degree in economics in 1967. Like his father, he is the editor of the prestigious Ghanaian daily The Statesman.

Ghana is a developing country and needs help from abroad. The gold mines still belong to English operators. Only the no longer lucrative diamond mines in Akwatia were returned, but they have to be renovated from scratch. However, the financial means are missing. 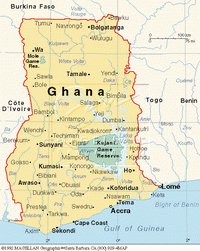 Ghana borders Burkina Faso in the north, Togo in the east, the Atlantic Ocean in the south and Ivory Coast in the west.

A narrow grass plain that widens towards the east extends from the coast inland. The west and south are covered by dense rainforest, in the north there is forested hill country. Dry savannah and forest areas follow. The far north consists of a plateau that is on average 500 m high.

The Akuapim hills in the east run parallel to the Togo border. The Red and White Volta flow from Burkina Faso into the Volta Reservoir, the largest artificial lake in the world.

More than 43 years ago, nurses from St. Dominikus Hospital in Akwatia built a hospital and expanded it continuously. A kindergarten, a school, wells, houses for the servants and construction workers and an oil mill were built. Many other projects are being planned. The money for this valuable development work is generated on the one hand by themselves, and on the other hand by donations from Germany. 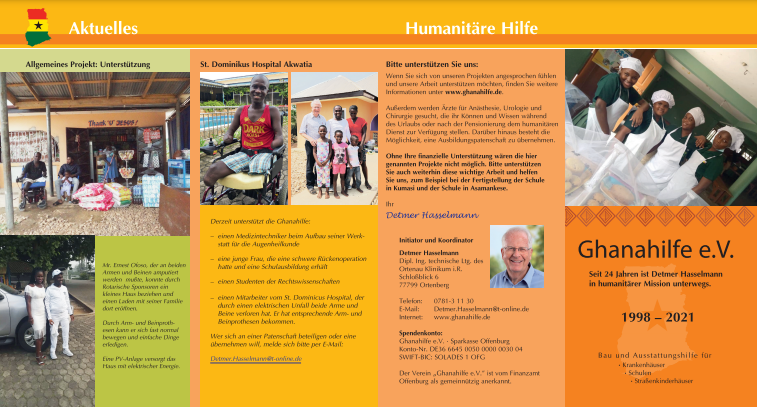